More to the point, all URLs, in all contexts, should be treated as case-sensitive. An easy rule to remember, right?

But you might’ve been misled by webservers that choose to do a case-insensitive URL match. Not all servers do so — and a server isn’t broken if it doesn’t do so.

In Marketo, a Design Studio URL like this works:

But if I accidentally lowercase my Munchkin ID, it fails (and redirects to my fallback page):

It also fails if I swap Images for images:

Interestingly, the part of the URL that’s the Design Studio filename is not matched case-sensitively. So this does work:

This serves to prove the larger point, which is that you can’t expect a URL as a whole to be matched case-insensitively. A link is as case-sensitive as its most case-sensitive part, and as a marketer you can’t control the sensitivity.

(FYI, spec-wise, the filename is just another path segment. Even if it looks like a filename.extension on your hard drive, there’s no such thing as the “file” part of a URL path.)

All goes according to spec

The URI standard is clear that raw ASCII characters (those not part of a %-encoding sequence) in the path part, in the query part, and in the hash/fragment part of a URL are case-sensitive. 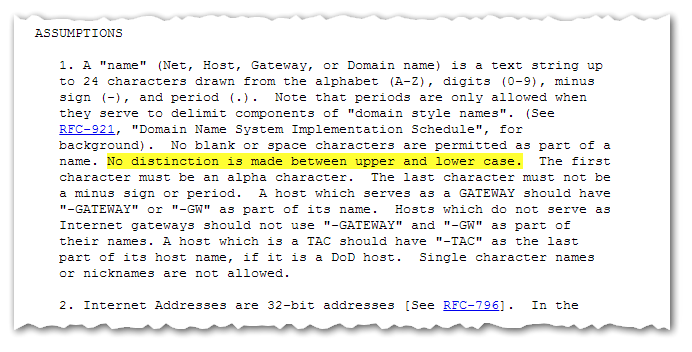 So if it’s supposed to be case-sensitive, are the case-insensitive servers broken?

Nope. URLs themselves are different if they differ in case (save the protocol + host). That’s always true.

But when used to GET or POST a web resource, a webserver is allowed to return the same resource for multiple URL variations, after doing a case-insensitive lookup under the hood.

Another thing to realize is that the webserver never sees the hash. So if a server returns the same document for the 3 URLs

that’s not actually a matter of choice — the server only saw https://www.example.com in all 3 cases. Client-side JS can see the hash, though, and modify content accordingly (and you should expect it to use case-sensitive logic).

Don’t get overconfident with bare hostnames.

Yes, https://some.eXaMpLe.com is implicitly case-insensitive (because it doesn’t have a /path, ?query, nor #hash). But case-insensitivity only applies if the scheme and hostname are in their original positions.

That URL might end up in a query string. For example, when you pass referrers or next-hops around:

Now, the original URL has been (as is proper) URL-encoded and placed in the query string so it can be read on another page. That means it’s no longer in the case-insensitive part of the URL. When your attribution code parses the query string, it’s going to do a case-sensitive match unless specifically told otherwise. So it will not see some.eXaMpLe.com as matching some.example.com.

Emails too, in theory... but not in practice

As I reviewed in an earlier post, email addresses are technically case-sensitive as well.

But unlike web URLs, which are very much case-sensitive in the real world, email addresses aren’t case-sensitive in practice; the negligible number of SMTP servers that still treat them as such isn’t worth worrying about.

(And the host part of <mailbox@host> could never be case-sensitive, for the same DNS/HOSTS reason noted above.)