Asked often, but rarely answered with confidence: What are Marketo's standard fields?" Even if you have a baby-fresh Marketo instance, it's not as simple as you think. Since most of us inherit already-running instances, it's tricky, and we're burdened by incomplete docs and confusing terminology.

Then there's the fact that the REST API Describe method, utterly frustratingly, won't show the field type for a given field. (Nor will it show hidden fields, a disaster in its own right.)

What does Marketo mean by type = standard, though? How about this definition:

In the end, the most reliable source for standard vs. custom is Admin » Field Management. When you try to change the type of a standard field, you'll see this:

But with a custom field: 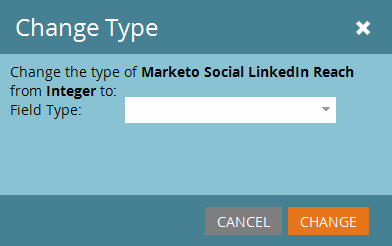 (Note that I purposely chose Marketo Social LinkedIn Reach here, mislabeled in the first doc above as “standard” but actually custom.)

By parsing the Field Management tree offline, we can get all the fields the UI considers standard. True, there's something slightly off here, too: this is from an SFDC integrated instance, so there are a few core SFDC fields considered standard that would be supplanted by Dynamics fields in other cases. Anyway, here goes: